Although I promise myself every year that I won’t have one single thing left to buy on Christmas Eve, inevitably always find myself with a list of ‘bits’ to get. Even though I have the bright lights of Dundrum Town Centre down the road and the cosmopolitan centre of Grafton St a short Luas journey away, it is at the original retail mecca that is Stillorgan Shopping Centre where you’ll see me queuing to enter from the roadside, amid the scores of other drivers displaying varying degrees of festive cheer and last minute panic.

As I sat in the car queue for second time today, I began to consider what it was that drew me back time and again to the humble centre.Perhaps it’s because of the significance these surroundings had during my childhood Christmases. Back when A-Wear was Gay Wear, Tesco was Quinnsworth and the aisles of Dunnes were stocked bananas instead of tights, Stillorgan Shopping Centre was THE centre of style and convenience not only in South Dublin but throughout the county. A spread in Woman’s Way Weekly from January 13th 1967, included a double page ad for the centre and four further pages of editorial, reporting how it had opened just before the previous Christmas and ‘as an experiment in the new idiom of consumer server  it was exciting’. ‘Now’ they told us ‘ it is settling down and developing into an integral part of modern life serving the growing suburban community for miles around’.

They remarked on the ‘new approach, providing shops and services, all under cover, with specially planned parking spaces for cars’. No multi-stories here folks … but who needs the hassle of tickets and memory tricks to ensure you can recall what floor you were on? Better to drive around in circles, soaking in the atmosphere, spying on the fellow shoppers and keeping your fingers crossed that someone might leave at some stage soon. Of course there are always those feckers that make your heart sing as their keys swing while they make their way to their car, only to open the boot, pop the bags in and smile smugly as they walk off for round two of the shops.

Parking was never to much of an issue for the O’Brien family however. Papa always had some secret places to abandon the car that no one else knew about. Yep, that ‘staff only’ car park was strictly for the wise that looked beyond the rules and saw only spaces …sure you could even use the private entrance in to the shoe shop and get straight to the heart of things by slipping through the measuring area. It was a good job that we did have these special areas to park in too as we spent half our lives in Stillorgan; no task in daily life was so big there wasn’t something in the centre that could help. You could even get your children minded in the oddly positioned creche down the back (for free I think – not sure this would instill much confidence in the modern mother?) and should you decide not to drop the kids off there you could leave them playing ring a ring o’ rosie with the statue children near the book shop, overlooked by the statue fiddler. Grand job. Follow up the primary-school style stairs in the empty space near the creche and for just 5p maneuvered in the handle/slot machine combo, you could use a public toilet. No 5p? No pee.

There was the little space under the other stairs (the one that no one ever used but no one could ever tell you why they didn’t use it) which was, and still is, home to the worlds smallest electrical store. Actually I do believe it was a vacuum cleaner menders originally although that says nothing for the quality of Hoover should the business have been kept open so successfully on this service alone. Besides said vacuums regularly being awkwardly passed over the little counter which is situated directly on the walkway of the mall, it was the one place everyone knew you could get a 13 amp fuse, an extension flex, a screw-on lightbulb that could be found no where else in the whole of Ireland and an nondescript accoutrement that was sure to fix your ailing stove. By George, they must have some heater under that counter too as, for all Stillorgan shouted the virtues of their ‘undercover’ shopping, the entire middle of the centre is totally exposed, leaving the knowledgable electrical man exposed to all the elements, all year round.

There there was Cassidys ladies fashions. I adored this shop. I was never really old enough to be buying the styles on offer there myself but I often tagged along with First Born Sister and her best friend The Curly Hair Twister when they went looking for something suitably stylish for their night in Blinkers. I watched as they chose their nappy pants and off the shoulder tops with serious consideration, all the while flicking their permed highlighted hair with each new deep thought. They’d discuss the benefits of the multi-pack of colored bangles versus those of the multi-pack of diamonte earrings; the latter made sense for their multi-periced ears but then again the jangle of the bangles as they flicked the perms was an undeniably wonderful extra. Then they’d spot a banana clip for their hair and it threw an entirely new consideration in to the outfit mix. The ladies of the 60s were surely having covet overload in the very same space as the then House of Cassidy advertised ‘check double breasted foam-back’ raincoats in Bitter Chocolate, Gold, Coffee and Grey … which colour to spend their £6.6.0 on was no doubt met with equal discussion time and consideration. 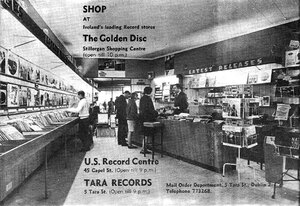 Before McDonalds arrived on the scene with its big shiny party boat and paper-wrapped burger excitement, the only gastro-hub you’d be hoping your folks might take a turn in to was Anne’s Hot Bread Shop. All mouth-watering smells and brown paper bags, this coffee shop was always heaving with people sitting down for gossips over their sticky buns and cigarettes as well as those collecting birthday cakes and tray bakes (admittedly this term is only in my vocabulary since the addition of the Northern Special Gentleman but I do feel it’s particularly descriptive). When a parent veered left on the way to the car from the shopping, you knew you were in for a serious treat.

As I got older it was O’Connor’s Jeans in all it’s overpriced trendy glory that drew me to the centre. I’d try on every pair of jeans in the place, all a good 5 inches too long for my miniature legs, all the while listening to Jay Z’s first album and writing a mental Christmas list in my head. It was long and meant that between it and all the new cassettes in Golden Discs around the corner, I was going to have some serious thinking to do between then and December. It would be the month that would find us all in Stillorgan more than any other time of year. Although Grafton St had Switzers and all the ceremony that went with their window, nothing in the world signified the imminent arrival of Christmas than the illumination of that giant S in Stillorgan Shopping Centre’s ever-present random tower. The rest of the haphazard placement of lights took place over another few days and the spray snow in the windows usually coincided. Once the little moving man in the shoe repair shop (tapping his one nail in to that same heel he’s been working on for years) donned his Santa hat, excitement was fever pitch.

It took what felt like years for the little shed to arrive in the middle of the mall but once it did you knew that no-charge-Santa, with no fancy presses but always a chocolate to send you on your merry way, was in situ . Mini Lion bars were such an attraction that  for years after I should have been visiting him, the four-non-blonds that were myself and my three other too-old-for-Santa-but-not-too-old-for-chocolatte tweenie friends would regularly put squeakier voices on, choose a younger age to pretend to be, and happily queue along side the 5 year olds. Once the Lion bar was eaten, we’d swap scrunchies and oversized sweatshirts in an effort to gain additional access and ultimately get our hands on another mini-bar. Ah the memories!

So today as I rushed around the centre, grumbling about parking issues and promising myself I’d have my shopping done by October in 2013, I found myself thinking of all the memories Stillorgan Shopping Centre held for me and couldn’t help but wonder if there was a little part of me that ‘forgot’ those bits and pieces on purpose, just so I could turn my back on Town Centre’s and Outlets for one day, and relive the magic of Christmas’s past, Stillorgan style. Heck, I’ll say it … I love that darn shopping centre.

Santa was having none of me this year though mind you; perhaps I need a new scrunchie.

Whats she up to?

Irene is a stylist, MC, writer and, most recently, podcaster (well she would be, wouldn’t she?) – it depends on the day, really. Or, you know, the global crisis.

A regular on TV lifestyle programmes, she has incurable wanderlust and an insatiable love of all things Vintage – both of which she shares on the airwaves and social media… when she remembers to post.

Recently she has been recording the second series of The Gilded Thread, in which she hears about her guests’  lives through their clothes memories. While she is open to chatting to any persons of any age on her podcast, she does admit to being particularly partial to those with a few decades on the clock. For obvious reasons, recording has temporarily halted but she is very much looking forward to sharing chats, memories and a good old Rich Tea with her upcoming guests as soon as it is safe to do so.