In March, First Born Sister turned 40. As you may know by now, birthdays are a particularly big deal in our house and so with the entry to a new decade looming, we individually wanted to organise something special for her. On the Monday of her birthday I took her up north along with Mama to visit It’s Vintage Darling and have a day away from Dublin where we could drive, mooch, explore and switch off. It was a lovely day topped off with a birthday dinner and cake courtesy of her husband and four little ones. ‘Well’, my mother said, ‘I can only pray that my surprise on Wednesday goes off as well as your day did’. I think her concerns were unfounded. 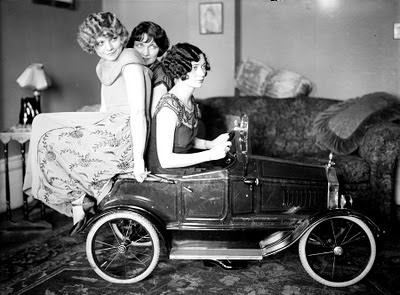 And so it was Wednesday and my sister and I had reverted to children in the back of the car with one pestering the other for information and the other revelling in their frustration. Mama had told her she needed to take a half day off work and that the three of us were going to see someone to mark the occasion. Papa was kindly driving us.  ‘We’re going to Dalkey apparently’ she told me. ‘Dalkey! And we’re bringing a plant. I don’t know anyone in Dalkey, I mean what on earth are we going to be doing there?’ she implored.  She sighed and looked out the window. ‘Am I adopted? Is this an elaborate way of telling me after all these years? My real parents will be waiting for me won’t they? I’ll be introduced to all of my half-siblings…’ So after an amusing sunny drive we did indeed pull up down the road from the famous Finnegan’s pub. At this stage my sister was losing all reason and insisting that we didn’t arrive early to wherever it was we were going. We drove up and down the road a couple of times until we were satisfied 11.30am had been reached on the clock. When she saw my mother skip across the road and push open the front door to a house she has never seen before I thought my sister might explode completely. ‘What is she doing? Who’s in there?!’ ‘Just follow’ I told her, myself with butterflies in my tummy even knowing whose house we were entering.

As I followed in I watched my sister take the lead from my mum down the corridor, I saw her hands fly up to her mouth which had let out a little squeal ‘Oh my God! Oh my God. I can’t believe it’s you! I followed gingerly and found my mum beaming, my sister baffled and a lovely welcoming lady sitting in a chair at the end of the table, laughing at the fuss of it all. It was Maeve Binchy and we were in her home.

A few months prior to First Born Sister’s 40th, Mama had written to Maeve explaining that her daughter was reaching this milestone and, as we all enjoyed and shared her books so keenly over the years, she would be honoured if Maeve might join us for a girly lunch to mark the occasion. A long shot you would think considering we didn’t know the woman from Adam and quite honestly the kind of invitation that I think only my mother would make. Surely she would think her quite bats. However, a short few days later a handwritten letter arrived to my mother. It was from Maeve. She explained that she did not go out as much anymore so would not be able to join us for the lunch but she had a suggestion: Come to my home with the birthday girl and her sister and we shall have a glass of wine to mark the occasion after which you should head in to Finnegan’s and have your lunch in there – the food is beautiful she assured. An incredibly warm, generous and practical proposal; traits that we would soon find epitomised the lady.

‘Come in, come in, sit down, move the cat’ she advised as we made our way in to her living room. On the table were 4 wine glasses, a plate of smoked salmon and brown bread with slices of lemon and a small cake with a single candle in it, all organised by Maeve in preparation of our arrival. She chatted away as if we were old friends and told us how much she had enjoyed the letters from my mother. In response to the first letter Mama had thanked her sincerely for the offer and said we would be delighted to come and we would bring the wine. A letter back from Maeve told her that she would do no such thing, she had plenty. Upon sitting down she told Mama in a most non-fuss manner to pop back up and retrieve said wine from the fridge. We were fascinated by her already. We raised our glasses of chilled white wine to toast the birthday girl and the special occasion. She presented First Born Sister with a copy of her latest book complete with a beautiful, humorous personal message written inside. She lit the candle on the cake and I took a photo of the three beaming ladies gathered around it; a treasured image forever more.

We spent the next half hour or so discussing her life, our lives and everyone’s memories. Maeve showed particular interest in First Born Sister’s life and family, making a real fuss of the birthday girl. She shared tales of her beloved husband (who was absent due to a golf commitment and very sorry he was missing us, we were assured), her first publishing deal, buying their Dalkey home, minding friends’ children, writing as a career, teaching, family and her neighbourhood. She regaled us with details and memories of which I won’t divulge in respect to her earnestness with us on the day. Needless to say they were captivating. I was in awe of the ease and warmth with which she conversed with us three strangers in her home. She showed interest in my ambitions to write a Vintage book and agreed that the human stories behind such businesses were the most interesting. We discussed her many books’ characters and recalled various stories that had touched us, written by her own hand. She was humble, self-deprecating and kind. It occurred to me many times as I sat sharing her table that people often suggest you should never meet those that you admire from afar and I considered what a great shame it would have been to take heed of such warning in this case.

We were conscious of time and didn’t want to overstay our welcome so began to say our goodbyes. Maeve wouldn’t hear of it until the wine was finished and told us that we simply must go to the first floor and see where she and Gordon did their writing. As someone who loves to write and longs for a dedicated space in which to do so, I was overjoyed at her generosity at not only allowing us to come in to that precious space but insisting we do so. For me it was quite magical and thoroughly romantic to envisage the two authors sitting there from 8am to 1pm, writing, imagining and creating, together. We looked at photos and pictures, framed book covers and hard-backs, pot pants and cushions, all the while being guided by Maeve as she narrated the life of the space in which we were exploring. She would use our names in every sentence and made each of us feel incredibly important.

‘Would Irene like a photo before you go?’ she asked as we began to say our goodbyes for a second time. I remember being so touched by this suggestion as I simply wouldn’t have asked such a thing when we were in her own surroundings being made so welcome. Yet she was intuitive and considerate, suggesting it casually and without ego or self-importance but simply because she didn’t want me to feel left out. And so again First Born Sister and Maeve beamed to the camera, this time with me joining them and Mama behind the lens… another wonderful memento.

As the other two had finished their hugs and thank yous they began to run out the door buzzing on wine and excitement, I asked if I should clear the table? Yes, she told me, it was probably a good idea as she has someone calling and didn’t want them to think she had taken to morning drinking alone! We laughed at this and bid each other so long with Maeve sharing a great big smile and chuckle. ‘Enjoy your lunch ladies. I’ve had a wonderful time.’

When we heard of the passing of Maeve Binchy last week we all ached for the loss of such a lady and marvelled that she had let us in to her life so recently. In the weeks that past since our visit, Maeve and Mama had stayed in contact via letters with the last from Maeve telling mum that she would very much like the three of us to join her again soon, this time for one of the five celebrations she was planning for Gordon’s big birthday. As I listened to the many and varied accounts of Maeve’s life from friends, fans and colleagues alike over the past week, I felt honoured to know exactly first hand what they meant when they spoke of her warmth, her generosity and the ease with which she related to people. ‘Imagine if you were only turning 39’ I said to my sister, ‘we would have missed out so much’.

The day after her death my mum called me and said that they were asking those radio listeners with any memories of Maeve to call in and share them. ‘I feel like ours is too special’ my mum said and I smiled in agreement. From what I was hearing, that was the feeling that everyone that met Maeve Binchy had – an amazing gift she bestowed on all. My favourite memories from those shared over the past week were from the other female writers whom Maeve had encountered. ‘Success is not a cake’ she told them ‘it won’t run out from others having their slice. There is enough to go around for everyone’. I could absolutely picture her delivery with this nugget and felt it summed up her spirit as we had encountered it.

We can learn a lot from that special lady.